Sunny Slope Farm was first established in Salem Missouri by 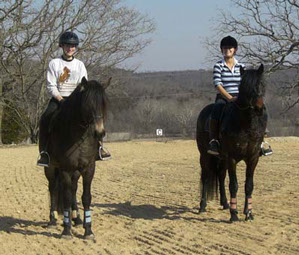 Louie Haas and later was inherited by Ferdinand J Haas around the 1890's. After Ferdinand died the farm was sold to his daughter, Maxine and later again resold to someone outside the family. In 2002 Ferdinand's son Jerry Haas and his family brought the farm name back after buying a 143 acre farm in Hillsboro, Missouri. The purpose was to start breeding Connemara ponies. The farm rests on the end of a half mile driveway, overlooking the beautiful Missouri hills and valleys about an hour southwest of St. Louis. Sunny Slope Farm and Erin Terra Connemaras are striving to breed correct, true to type Connemaras, much like their ancestors of Ireland. Yet, they want the Connemara that can Do It All. From Hunter-Jumpers to Driving and from Eventing to Reining, they want the pony that can go out and not only do anything but also excel at what that task might be. The farm in Hillsboro, MO now hosts mostly sheep while the ponies live with Michelle in North Carolina and Nicole in Pennsylvania on their satellite branches of Sunny Slope Farm.  The Haas' also bought their first Australian Cattle Dog in August of 2001 from Connie Hayes of Hiredhand Kennel. Their second ACD was brought into the house in October of 2002 from Larry and Marilyn Painter of 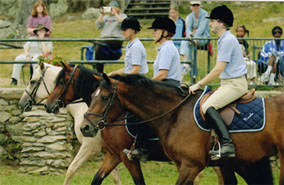 Kuawarri Kennels. Dry Creek Kennel was established by Michelle and Elaine to breed ACD's for the versatile dog that that they are. All cattle dogs at Dry Creek Kennel are trialed in Obedience and Herding and are also shown in Conformation. We look forward to breeding the cattle dog of the future, the one that can still "Do It All." In 2004, Elaine joined the BBSIA to try and save the last purebred lines of the Barbados Blackbelly Sheep here in the US. The herd of sheep is continually growing and improving by integrating as much original and proven bloodlines as possible. At the farm we try to breed and raise some of the most correct and exceptional stock in the country, whether it's ponies, dogs or sheep.